I just moved all my Pentium 3s into the basement. I’m not too proud of the specs, but they do everything I need them to do. The things the current server doesn’t do (can’t? haven’t tried) are a Ventrilo server and a Source dedicated. I hope to get a Pentium 4 – the school is selling some. I haven’t been able to get specs or a price point on those yet though. Anyway, after Ryan came over and put the end (a female end, he found that easier as it doesn’t involve crimping) on the cable, I started getting ready to move my boxes to the basement. 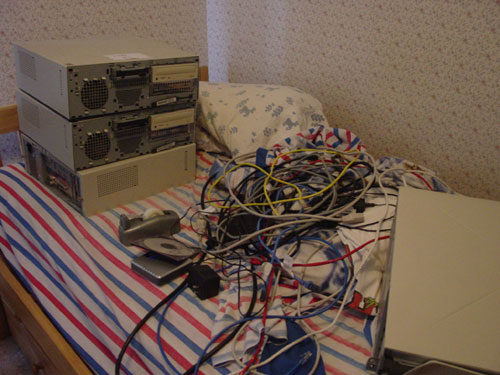 I moved the cables downstairs just fine. I had to move the computers on to the floor. That isn’t all of the cables, I took this in the middle of setting everything up. 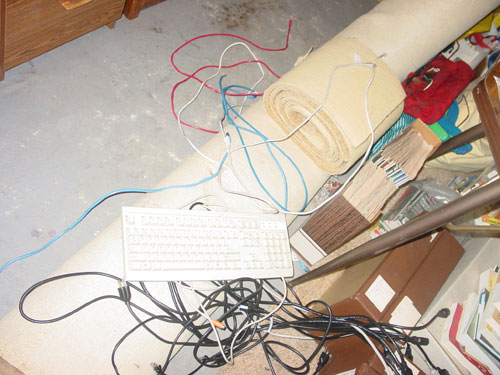 My mom wouldn’t let me carry them out of concern for my hips. (I wanted to, though.) So I had to wait for someone to carry them, and my mom wouldn’t do it because she’s having trouble with her shoulder and back. That left our neighbors – who are amazingly strong – to help. In the background there you can see the pile of faceplates I took off, and the case of the dead server. I think it still has a mobo and PSU in there. When I moved the stack, the floor had a noticeably cleaner spot on it – they were heavy. 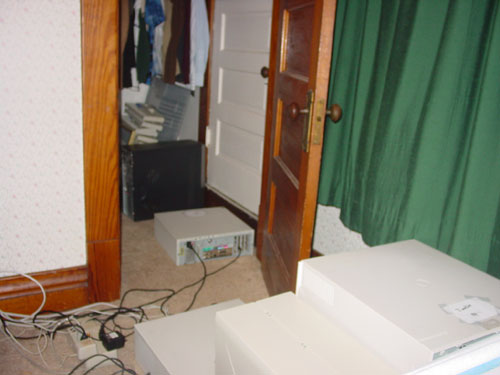 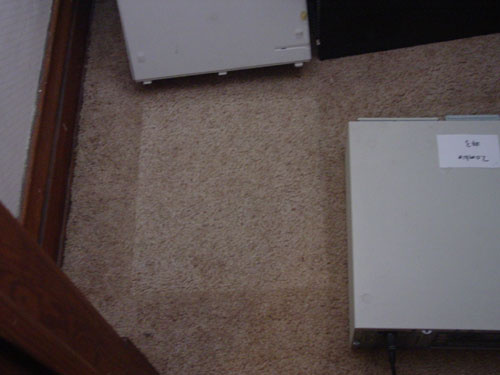 The alarm is the only one left in my room. It is now inside the closet. 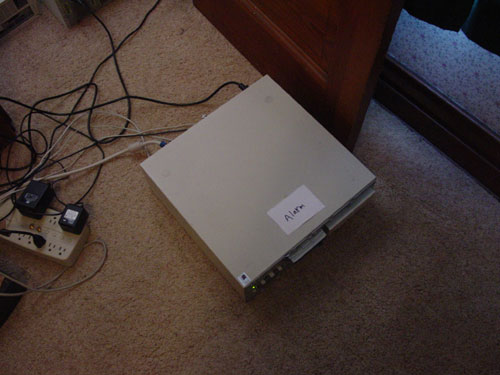 When I moved the switch, the router got its box all to itself. It has a box so its lights aren’t distracting at night. The speakers there are plugged into the alarm machine, which is running Fluxbuntu Gutsy Debian Etch [EDIT: Changed when I noticed that I was running out of my 256MB of RAM just to play a sound file. I uninstalled X, but didn’t feel like taking the time to figure out how to add a virtual console and whatnot.] and has a cron job to launch xmms [EDIT: MPlayer] to wake me up every morning. I used the nail file on that nail clipper to press the power buttons – they are recessed when without faceplates. I now use a paper clip. 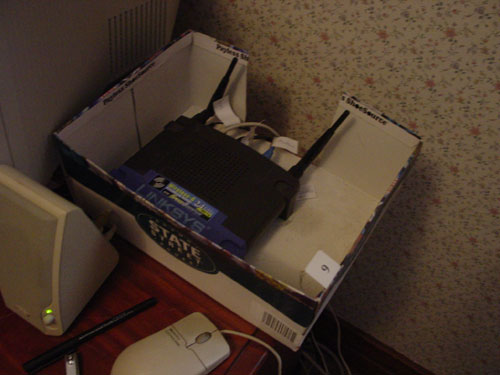 Here’s a shot where I was trying to figure out where the keyboard port was by taking a picture of the back of a machine – there isn’t enough room behind the shelves. 🙁 You can see the purple label just below the green – it’s the lower PS/2 port. 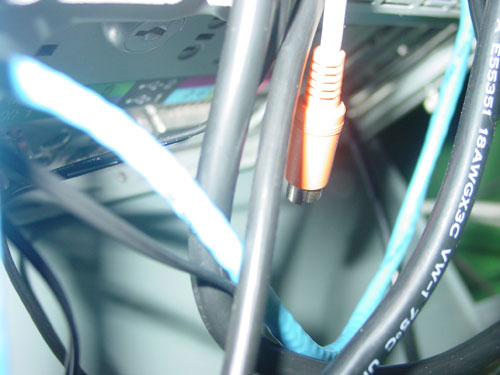 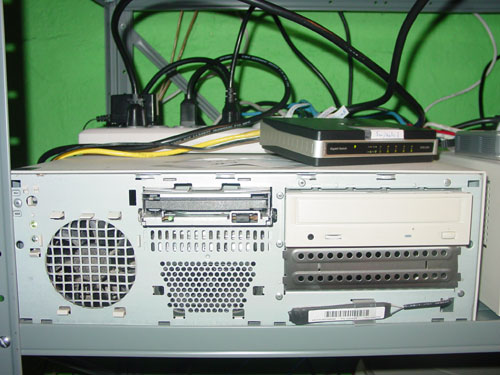 Here’s everything all finished up: 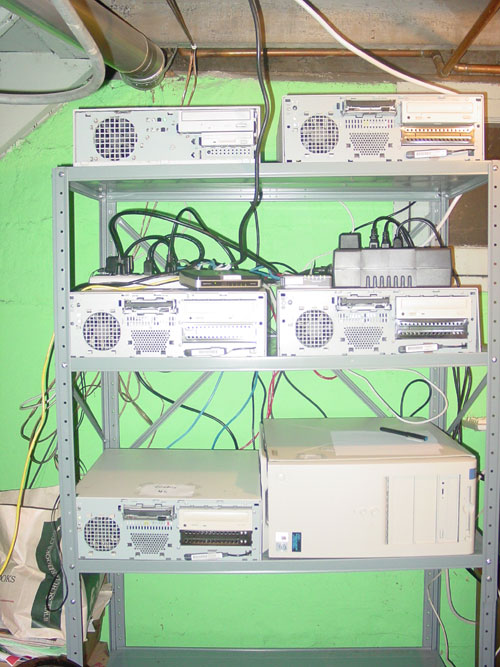 Another angle so you can see the monitor. I might want a KVM, but it wouldn’t be useful that often. 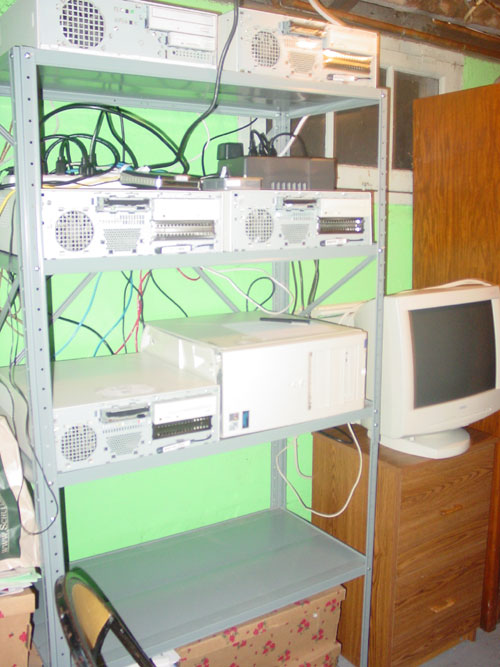 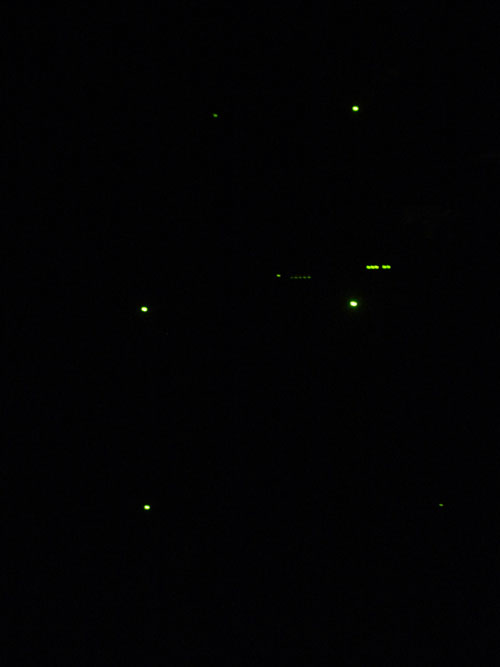